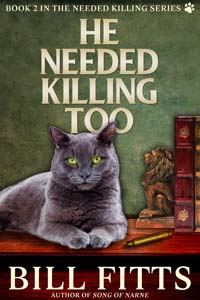 Cozy Mysteries: He Needed Killing Too

He Needed Killing Too

Book 2 in the Needed Killing Series

The director of the University Press was often characterized as a man who needed killing. The Press’s authors and employees certainly wouldn’t disagree--even Peter the Gray, the office cat, detested him. So when someone puts a bullet through Philip Douglas’s head, Crawford has plenty of suspects to consider when he is once again thrust into the role of detective.

“Bill Fitts clearly understands about secrets in small southern university towns, and his reluctant detective, James F. Crawford, is the kind of guy you’d like to join for dinner—preferably one he’s prepared.”