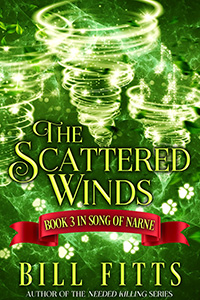 Book 3 in Song of Narne

Sokhal’s Star glowed in Kenrad’s hand as he held the pendant up.

“What’s he waiting for?” Merkyn looked back at the Erramic archers. “If he doesn’t get out of the way, he’s going to get shot!”

The light of Sokhal’s Star went out. Kenrad staggered, sinking to his knees. As he fell, Pratha left his side and glided down the slope, muscles rippling under her fur. With an angry roar the Sand Cat made her presence known.

“Kenrad!” Blumgar lunged forward with Merkyn right behind. Heedlessly they charged down the slope. As Pratha struggled with the lead pirate, turning and twisting on the ground, a second pirate ran up screaming and bellowing. Sword in hand, he loomed over the writhing bodies of man and cat. The pendant in Kenrad’s hand spat out a tongue of light and the pirate burst into flame. His screams silenced everything else.

“This book is the best of the series. The world he created became so real to me. Enjoyed the cast of characters and how they developed from book 1! There had better be a book 4.”